Our Family Farms and coalition partners are back in Salem to protect Oregon agriculture and the specialty seed industry by creating accountability for genetically engineered (GE) contamination events in Oregon! 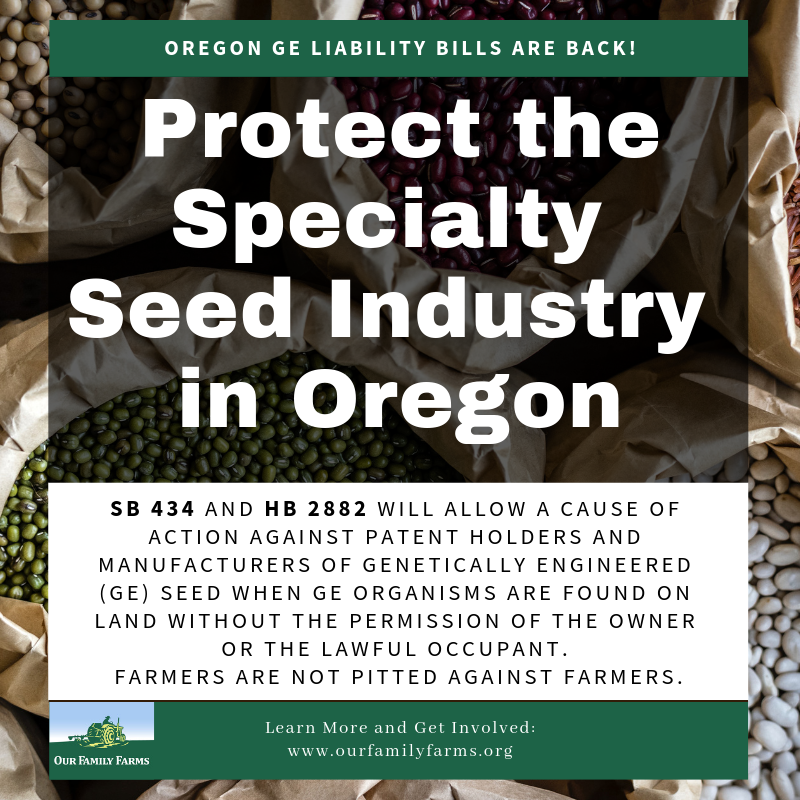 SB 434 and identical bill HB 2882 are live and have been placed in the Judiciary Committee in both the Senate and the House.

It is possible that we will need to call upon you to help us support these bills in the next couple of weeks. You can help by submitting testimony, traveling to Salem to testify at a hearing along with our lobbyist and other coalition members, and/or adding your name to our public list of supporters. Let us know how you can support us through this form.

You can also DONATE FUNDS to support these efforts—we can’t do this without your support.

To prepare your testimony, see examples of 2017 submitted testimony here (first public hearing) and here (second public hearing). We are also happy to help you draft testimony. Call or email Amy Wong at (805)455-4200 or [email protected] if you need assistance or have questions.

SB 434 and HB 2882 will hold patent holders or licensed manufacturers accountable when GE organisms are found on land without permission of the owner or lawful occupant. These bills will not pit farmer against farmer. The parties that will be held responsible are the corporations behind genetic engineering, not the farmers who use them since in some instances, contamination is out of the hands of the farmer who planted the seed. GE contamination, and the threat of contamination, costs farmers--including Oregon farmers--billions of dollars. It is time to level the playing field and hold the corporations behind the technology that is responsible for this contamination accountable.

We’re not doing this alone—Cultivate Oregon, Center for Food Safety, Oregonians for Safe Farms and Families and Friends of Family Farmers are involved in this important work to ensure that we have a specialty seed industry for generations to come. We also are excited to be working with Oregon Organic Coalition this year.

As many of you know, GE contamination is a one-way contamination and the burden falls on the farmer who needs to fence it out, which can be impossible in some geographic regions. Further, the legal precedent is not favorable for a farmer who is inadvertently contaminated by somebody else's GE crop. GE contamination is often irreparable. For example, the GE bentgrass infestation in Malheur and Jefferson counties is now the responsibility of the state and local farmers and ranchers since the federal government deregulated bentgrass, and as a result there no longer are any legal teeth to hold Scotts and Monsanto responsible for this ongoing contamination.

Oregon is an incredibly unique seed growing region and it is important that we protect this legacy. Oregon is one of the top five vegetable seed producers in the world, owing to the state’s fertile valleys and temperate climate. Our vegetable specialty seed industry is worth at least $50 million dollars annually with room for growth if the right protections are in place. Ensuring that Oregon has a robust specialty seed industry that includes organic seed production will help create an environmentally and economically resilient food system, especially in terms of adaptive seeds that will help fight climate change.

Why is this legislation needed:

•  There are no statewide GE regulations in Oregon.

•  All counties, exception Jackson County, are preempted from making decisions about what type of seeds are grown in their jurisdiction.

•  The ban on growing canola in the Willamette Valley sunsets later this year. Canola poses exceptional threats to a wide variety of organic and conventional vegetable seeds and as of right now, it is unclear how ODA will address this before the ban sunsets. Potential GE canola contamination unfortunately hasn’t been a large part of the official discussion, and even non-GE canola seed was recently found to be contaminated. As a result European farmers are ripping up their crops and won’t be able to use the fields for two years. See: https://www.reuters.com/article/us-france-gmo-bayer-idUSKCN1PV1RG