Dicamba Herbicide: The Next Broken Promise for GMO Farmers

Dicamba Herbicide: The Next Broken Promise for GMO Farmers

Why have states taken the rare step to impose bans on its use? Farmers in 10 states sue Monsanto for faulty product.
Dicamba is a weed killer and perhaps the most widely used chemical (along with 2,4-D) that represents the so-called pesticide treadmill. The pesticide treadmill comes in to play because the most commonly used weed killer on GMO crops, glyphosate, has been used too much for too long and there have emerged glyphosate resistant weeds on well over 65 million prime farmland acres in the U.S. alone, an area the size of the entire state of Oregon. For many years the need for another weed killer specifically for use with GMO crops was obvious but farmers did not have dicamba tolerant crops until 2013-15 (corn, then soy then cotton ). Dicamba works like 2,4-D by killing plants through growth stimulation beyond available nutrients.  The growing edge of the plant dies from lack of nutrients.

Why has dicamba become so controversial?  The manufacturers know well that this weed killer is highly volatile, even capable of evaporating off the sprayed crops  and becoming easily spread to other crops.  But industry promised a new chemical formula of dicamba to be used with the new GMO crops, a chemical formula that would not be so volatile and thus would stay put on the sprayed fields when released under “calm” wind conditions.

But the results of volatility and spray drift issues are severe as documented by this farmer who grows soybeans on 6,000 acres. "We've had damage across just about every acre of soybeans we farm in southeast Missouri," said Hunter Raffety, a farmer in Wyatt, Mo. "In our small town, even the ornamentals and vegetables in backyards, have been lost. It's a big problem."
There are at least two complex issues.  First, the GMO seeds expressing tolerance to dicamba became available before the new generation of the chemically modified dicamba.  EPA only approved the new supposedly less volatile dicamba in November 2016, two years after the availability of the new GMO tolerant soy seeds became available to farmers. The old dicamba is especially known to be volatile and can spread even after the droplets become deposited on target plants. The second issue is that the lower cost for old formulations of dicamba are still readily available for grower purchase.

Reasons given for drift and volatility issues with dicamba are many and seem to vary among the states of the mid-south vs. the north. For Example, Arkansas, Missouri, and Tennessee have had more off-target cross farm contamination issues than further north in the corn belt. But many complaints have also been filed by farmers in Illinois, Alabama, Minnesota, Texas, and North Carolina. Three states (Arkansas, Missouri, and Tennessee) have filed partial bans and other restrictions on dicamba use for the remainder of the current crop year.

The majority of dicamba applications onto GMO dicamba-tolerant soybeans are currently made as the crop approaches reproductive stages.  In the past, prior to GMO tolerant crops, dicamba was used largely as a pre-emergent product and applied very early in the growing season. Now susceptible crop varieties including orchards and non-GMO soybeans, etc are at greater risk because dicamba applications are made later in the crop year. Due to later application dates, temperatures are likely to be higher. The higher the temperature, the greater the likelihood of vapor drift.
One may wonder why there is a cross contamination problem now with the increasing use of dicamba and but not so much with the more commonly used glyphosate-based herbicides.  Historically most farmers remember that corn is highly sensitive to low exposures to glyphosate.  But by comparison soybeans are 200-fold more sensitive to dicamba than corn is to glyphosate (see image). 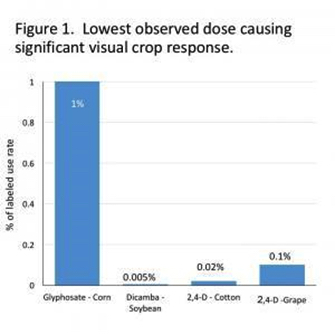 This extreme sensitivity of non-GMO soybeans (and other crops including orchards) to dicamba has received part of the blame for the damages of ‘”over spray and volatility.”  The pesticide chemical Industry is pushing back in many ways and has held classes for farmers to instruct them about using larger spray nozzle sizes and instructing on weather requirements prior to the use of dicamba. The controversy over dicamba drift is far from over since major lawsuits have been filed against Monsanto by farmers in at least 10 states. The basis of the lawsuits are financially significant to both farmers and Monsanto.  Farmers claim that even the newer formulations of dicamba are incapable of being routinely and safely applied to cotton and soybeans, without damaging other sensitive nearby crops.

In the meantime, many traditional farmers that are not growing GMO-based soybeans are losing significant percentages of their crops and yields.  One now hears talk of these farmers adopting GMO-based seeds next crop year that have the genetic basis for tolerance to dicamba. More GMO soy coming to the U.S. market. Was the sale of a faulty dicamba product that results in neighbor crop damage part of a strategy to market more GMO seeds in the coming years?

For further reading, see Dicamba Lawsuits Mounting and Not All Drift is Created Equal.

Dr Ramon Seidler, PhD, is a member of the Our Family Farms Board of Director's, a retired senior research scientist and Team Leader of the Genetically Engineered Organism Biosafety program within the US EPA and former Professor of Microbiology at Oregon State University.
homepage_promo
Do you like this post?
Tweet
Signup for our newsletter Support our Work